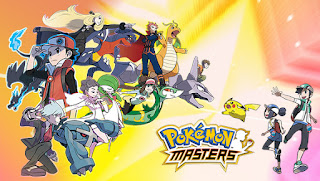 I have played a lot of Pokémon games, since the beginning. In my older years I have gone away from the series as a whole, I’ve never touched Sun or Moon, mostly because I was busy with other games, after all the formula doesn’t change often so if you’ve played one, you’ve played most. I find the anime is hard to watch as a 32 year old man. My wife Tessa and I have played a good deal of Pokémon Go from time to time, finding enjoyment in the raiding, and special weekends they have occasionally. But I’m not here to talk about game but Pokémon Masters.

When Masters was announced I was initially excited for a new Pokémon game on the phone. I thought if they could harness the fun parts of Go and bring it to a new game with better combat, and a few tweeks then sign me up. I waited patiently for the game to come. After a while Nintendo said summer 2019. So I waited. Then, 26 days before Fall, Pokémon Masters showed up. And my hopes of a better Pokémon phone game than Go were dashed pretty quickly.

Don’t get me wrong there are things that this game does right. Combat being a big one in my eyes. Standard combat in Pokémon games is typically one on one, Pokémon vs Pokémon, mano-a-mano, I don’t know how else to say 1v1.. Masters does things a little differently. Battles here are three on three. More is happening in combat here than in your normal Pokémon game. More to keep track of, more choices to make, and it works. For example, you have to highlight which Pokémon you want to focus on, and when you do that their “bar” levels up faster than the other two. Moves have a cost to them, so the higher your bar the higher the move you can have the Pokémon perform. So there is some logic in which three Pokémon you chose to do battle with, which order you put them in, and which one you focus on during the fight, but being able to switch in between the three once battle starts.

Combat is an issue with Pokémon Go, I found myself comparing the two games constantly the week of review. It’s hard not to, not a lot of Pokémon games on the phone, but they are worlds apart in my eyes.

Story is a big difference. Go has absolutely none, zero, nada. Like throwing a hot dog down a hallway, big empty void. Pokémon Masters has to much, way to much, just story everywhere. More story than I would ever care to have in a game that has almost zero voiceover work. I do not want to read all that story. And I know I’m saying the word story, but that is a strong term here. The story is very basic, the “character stories” are even worse than the main story to the game. It feels like fluff here, filler with no substance, you are better off googling some Pokémon fanfiction if you need some story, might even find more enjoyment in doing so.

Like just about every phone game these days you find a gacha system in place here. This one is no different. One of the things that I am liking in the new games, almost all the Nintendo ones give you this, is the percentages on the chances to get characters. I know almost all the other “real” countries require this now, and it’s a shame we don’t in America, but I like that we still have it here in the game. It helps, I guess, to know how horrible my chance is to get Blue and his Pidgeot, it’s almost zero. Thanks for keeping my hopes low Nintendo, you didn’t disappoint.

A sticking point that really upset me here where the characters and Pokémon that were available to possibly unlock. In the game they call them sync-pairs, because you unlock a trainer and their Pokémon. Like Brock and Onix, Misty and Starmie. There are 64 pairs you can unlock when the game was first available, I’m sure that number will change as the game ages. For example Nintendo kept promoting the game before release by showing you sync-pairs that would be in the game, like Blue and Pidgeot, or Red and Charizard. But, get this, Red isn’t in the game at the time I’m writing this. Perhaps the only pair I felt like I wanted above all else, and you tease me with him not even being in the game. You cut me Nintendo, deep.

The week we played this game on the podcast I was able to look beyond all the things that I disliked to see a Pokemon game I wanted it to be. I felt that if I would just keep playing it would become that game that I really wanted it to become. I was blinded by the shiny of the game. It does look polished, which I feel is almost the worst thing. The combat is really well done, but just about everything else around it is not fun. I’ve played the game a handful of times since our first week, but I do not have any intentions to play much more. Sadly this game is not worth the investment, in either time or money. Not to mention that if you want to sink money into this game, there are plenty of ways to do so, and it is not cheap.

Not a lot of traditional things about Pokémon in Pokémon Masters, and for once, I think that is a shame.

You can listen to our episode on Pokémon Masters on Anchor, or wherever you find your podcasts.

Elliot is a part of the weekly Budget Arcade podcast. Find him on Twitter at @Elliot_Argues You can also find his other podcasts; Tessa and Elliot Argue, and Wall Pull where you find podcasts.
at 10/02/2019 01:03:00 AM