Trifox is a third person action-adventure game developed by Glowfish Interactive, and published by Big Sugar.  It was released on October 13, 2022 for Nintendo Switch, and October 14th for Xbox One, Xbox Series S, and PC.

The premise of Trifox is a silly one:  You’re a fox of many talents, but one day you get jumped by a mysterious villain who ransacks your house and steals your TV remote. Which inspires your fox to hunt down the villain and get back what’s yours!  You start off as a normal character that runs and jumps, but quickly need to choose a starting class of Warrior (tank and damage), Mage (range and crowd control), and an Engineer (minions & gadgets). Each class has a set of moves that can be purchased between levels in the hub world, and you can change classes at any point in the hub, if you feel like experimenting or mixing and matching skills. This lends the game a lot of customizability. In Trifox, there are 3 areas and 4 levels within each area.  After finishing a level, you can return to it as many times as you want, if you want to grind for money or if you’re a completionist that likes to find each level’s secrets. It doesn’t sound like a lot of content, but the difficulty isn’t as easy as it looks.  Even trying to find all the gems in the level isn't as intuitive as you’d think.  Both of these “setbacks” were a pleasant surprise to me, as I was expecting not a lot of variety, and an easy game to finish for this review. 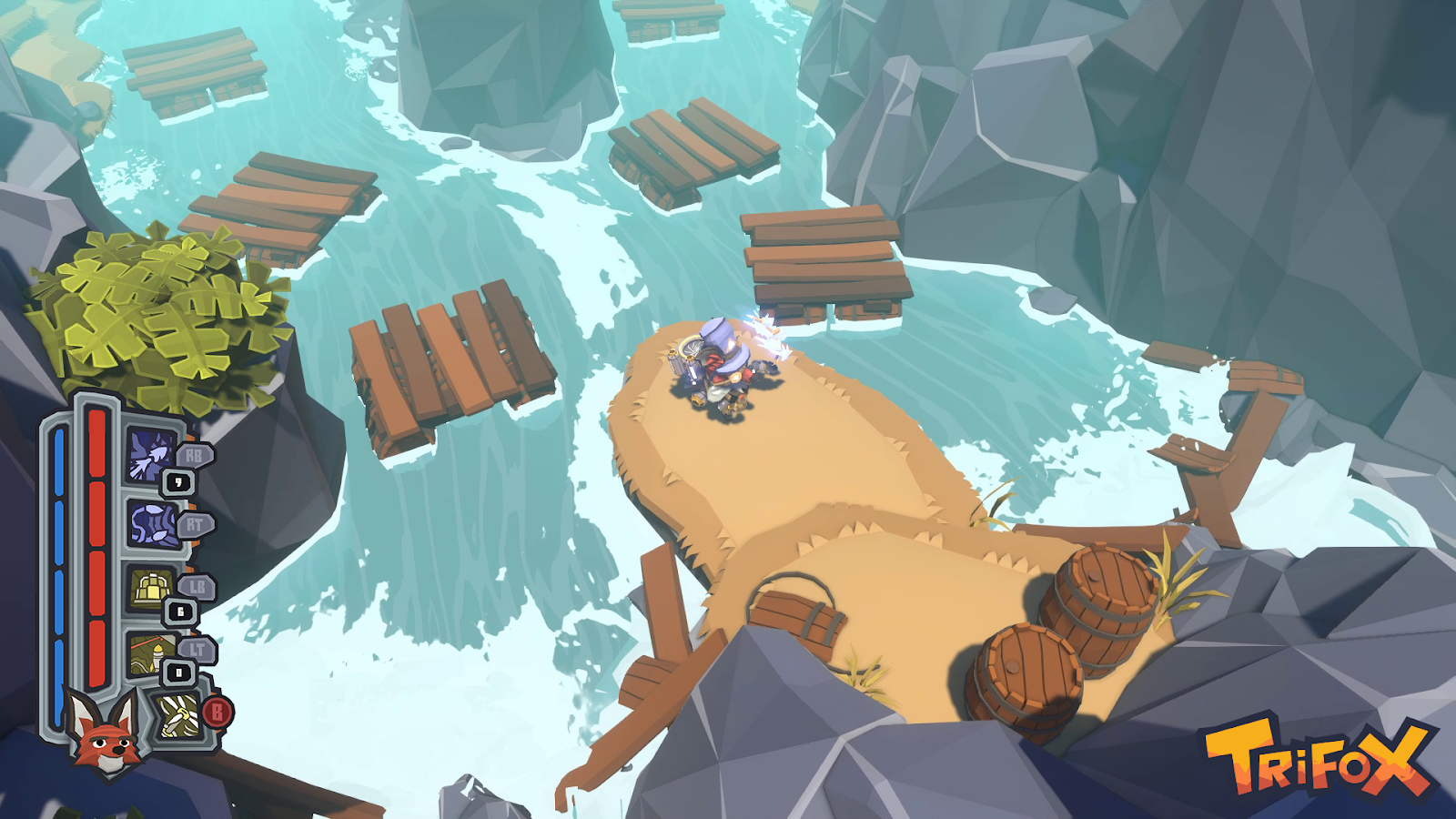 You can tell that Trifox was influenced by the PlayStation days of third-person action adventure games.  When initially loading the game up, the loading screens and graphics immediately reminded me of games like Sly Cooper, Jak and Daxter, and Crash Bandicoot.  It doesn’t have any voices, other than various grunting and screaming, but the characters emote plenty with their actions.  It’s a very cartoony feel right from the beginning and seems like it'll be a breeze for veterans of the genre, but don’t let the looks fool you…heck, don’t even let the first few levels fool you.  My mage blazed through the levels at the beginning, but then found myself dying and restarting a few times, until I had to rethink my strategy of running around guns (or in my case, magic) blazing.  In a way, I appreciated that it wasn't a pushover in difficulty, but I never felt completely outfoxed. (See what I did there?)

My main gripe about Trifox isn’t a big one:  I think the main character’s look is terrible.  He’s spikey looking, hard and polygonal in the close-up scenes.  From far away, you quickly forget about that, but considering that the levels themselves have a lot of good colors, sharing, and softness, I was surprised that the fox looked as gruff as he did.  The antagonists also shared that look, but their costumes and silliness made them fit their surroundings.  Even the little headshot of him in the bottom-corner near the health and skills meters looked a bit more cartoony than the beginning story scene. I don’t need soft and fluffy, but I was just a little surprised at how he’s almost Playstation-esque polygonal.  Maybe it was intentional.  Small gripe. 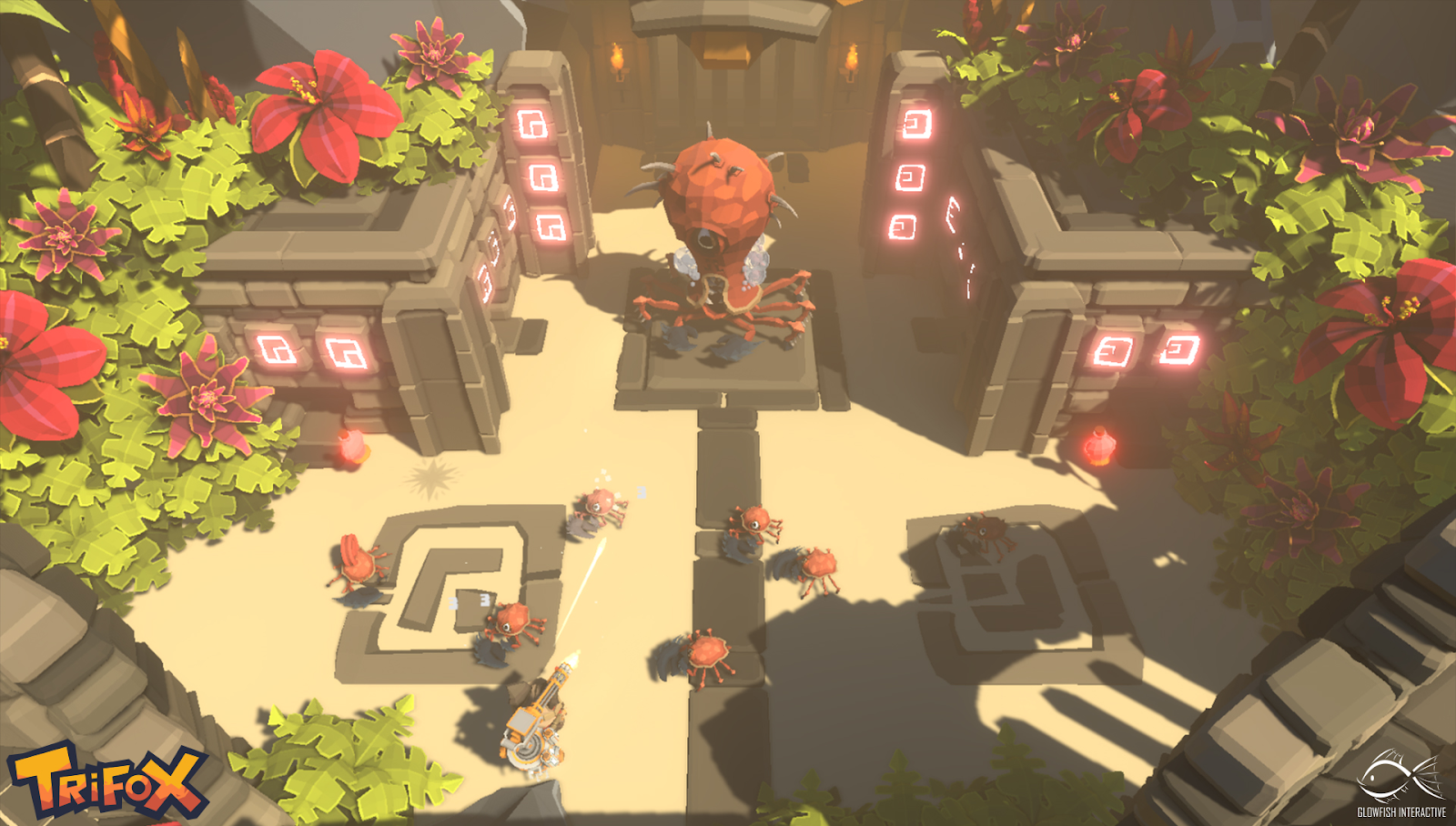 I played Trifox on a Steam Deck (PC), and it plays perfectly on it.  It’s a twin-stick game that utilizes the skills in the trigger buttons, and the graphics and resourced of the game didn’t kill the Deck’s battery.  It really translates into a great “game on the go” if you have a Steam Deck or a Switch, but it’s still worth checking out on the Xbox too.  The levels aren’t super long, but there’s enough challenge in them to keep you trying again, and being able to put the system to sleep and pick it up again with the Steam Deck or Switch was perfect for me.

In the end, I enjoyed the nostalgic feel of Trifox, and would give it a 7.5 out of 10.  It’s got some replayability and some uniqueness that keeps drawing me back in to finish exploring a bit more.  Now if only I can stop having nightmares of the main character screaming with his freakish face from the intro….