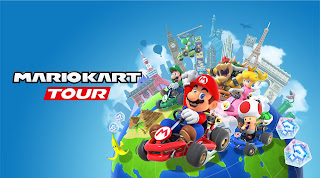 There are few game series that hold the magic in my eye better than Mario Kart. My first system was the SNES, and one of the first games I specifically chose to buy was the original Mario Kart. I recently was able to replay that game thanks to the SNES games that were put on the Switch. Jeff warned me not to try and relive my youth when it came to Mario Kart, and of course, I did not listen. Honestly I’m glad I didn’t shy away from replaying the game, I fell in love with it all over again.

I’ve played every version of Mario Kart, 8 probably being my favorite. I refused to purchase the game again when it came out on the Switch, I am somewhat of a Nintendo Fanboy and actually loved my Wii U, so I’m going to need you to go ahead and come out with Mario Kart 9 there Nintendo. In the meantime they have given me Mario Kart Tour for the phone.

First off, let’s talk polish. Overall I’ve been impressed by all the games Nintendo has put out for the phone in terms of look. They all look legit, and they all look like Nintendo games. They don’t always hold that initial shine, but it is certainly there.

Booting up for the first time, and I was in shock. It looked like Mario Kart, but on the phone. That feeling did not last though.

Get this, there is no accelerator, there is no brake to this game. None. A racing game without either of those two functions, are you kidding me.

Handling is awful. At first. You slide your finger one way or the other to drift, or steer. Not all at once though. The only way you can drift and steer at the same time is if you enable tilt controls. Tilt controls! I’d rather hear Jeff talk about Auto Chess for an hour. Back in the days of Mario Kart 8 you couldn’t talk to people directly in the online chat, you had to use small catch phrases, that Nintendo provided. My favorite catch phrase was “I’m using tilt controls!” so stupid.
I say at first, because once you’ve played a handful of games you get use to it. The auto accelerator isn’t too awful, the drifting isn’t too hard to learn. Annoying, but not impossible, and after a while I didn’t give it much thought. Complaint number one, the controls.

I had zero problems winning my first game. I thought, man, I haven’t lost my touch with Mario Kart, and then I learned that I’m playing against the computer. Online play is “coming soon” whatever that truly means. But it is deceiving, because the people you are racing against have unique names, even names in Japanese, so they want you to think you’re playing real people. Complaint two, it’s not a full release of a game.

There are 20 racers to unlock, 19 karts, and 11 gliders to be won in a gacha style of unlocking, again, the normal for phone games. As you play the game you level up each racer, kart, and glider. But there is a limit on how much you can level in a day’s time. Frustrating beyond belief, and a huge turn off. Just as you are getting in a groove you can still play the game, but no longer level up for that day. Complaint three.

You can listen to the podcast to hear about gameplay, replayability, and what the pay wall is all about. I will say this about what paying gets you, essentially their gold pass. The price of the play pass, which is $4.99 a month is a joke it unlocks a few addons, and the 200cc races, which is a let down to someone who is playing these games without putting money into them. You will not get $4.99 a month worth of enjoyment here, plain and simple. If you have that kind of money, go buy Mario Kart 8 Deluxe, you will enjoy it, and find it has far more replayability for that price. Price point for the gems seems to align with most phone games, not great, kinda awful, but it’s there, and it is the new normal. The price point for the pass is robbery. Complaint four.

But having said those awful things I really do like this game. I had a lot of fun, and I didn’t spend a dime all week, or felt the need to. I feel like this is a Mario Kart game, for the most part. Certainly worth your time, maybe even worth a few dollars, maybe to try out the gold pass for a month at least, just to see.

You can Listen on Anchor to this episode.

Elliot is a part of the weekly Budget Arcade podcast. Find him on Twitter at @Elliot_Argues You can also find his other podcasts; Tessa and Elliot Argue, and Wall Pull where you find podcasts.
at 10/01/2019 06:00:00 AM