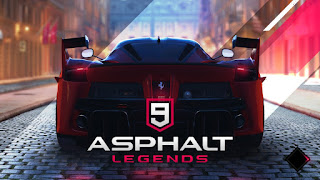 A few words before we actually talk about the game. I do not play racing games. I will play kart games, heck I’ll 100% a Mario Kart game, unlock every character, kart, glider. I’m all in. The racing genre in general just never appealed to me. I did enjoy Burnout back in the day, mostly for the crash into things mode, whatever that was actually called.

That being said, playing a racing game for a week and then reviewing it was already not high on my list. Going in I knew it would be an uphill battle to find enjoyment out of this game, and getting my seal would require Jedi like precision in controls to pass. Anyway, let’s get started.

You would think with a title like Asphalt 9 this could easily be thought of as the 9th entry into a series, and who would blame you for making such a foolish mistake? This is the 16th title in Asphalt, and it spans 21 platforms. Wanna guess the first platform it was on? I had almost forgotten that the N-Gage was a thing until I saw that Asphalt got its start on that platform. If you have no idea what the N-Gage is, do yourself a favor and give it a Google, you won’t be let down. The series started in 2004, I was a junior in high school, and the first time I heard about the series was when Scott let us know it would be the next game for us to review.

One of the ways I can tell that I’m getting old is when I turn on a game for the first time, and there is too much happening on the screen. That was easily the case with Asphalt 9, the moment you turn it on you are bombarded with all kinds of things, none of which make much sense; and then, without warning, you are just thrown into your first race.

I did find the tutorial to be simple and straightforward. Controls are easy to understand, however the game does feel like you are playing one of those old arcade racers, but for all the bad reasons. I felt like I was sliding on ice most of the time, except when I was trying to drift, then it felt like I was rubbing my arms with sandpaper, unpleasant at best. I don’t know if I feel this way because I don’t play a lot of racing games, or the controls for the vehicle just aren’t great. I will say the touch controls that you can use during the menus though are amazing, perhaps the best use of touch controls for menus on the Switch to date. I know that sounds like a joke, and I’m sure there is one to make here, but I am not joking, they are very well done, take note developers, they did something right!

There are five modes to play in Asphalt 9, you start with the basic “My Career” having this game out on mobile before it hit the Switch was actually beneficial to Switch users. There is a lot of content to go through in just the career mode. There are five different chapters, each one has its own cup with anywhere between 5-15 races in each cup. This would take more time than I could get through in a week alone, not to mention the other modes. 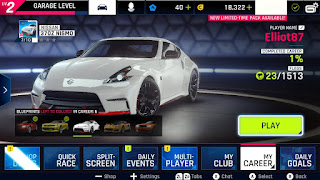 Some races are super short, some are a bit longer. I feel the further you get into each season, the longer races will get. This was something I did not care for. You never really know the length of the race, so when the objective is to win, you do not know how much further to go before you’re done with the race. With that comes another critique, if you mess up once, it's game over for you during that race. It is very hard to overcome one or two simple mistakes in a race and still win. Every Time you do race you expend one of your “gas slots” and you either have to pay with currency to fill back up, or wait until the timer let’s you know you’re good to race with that car again.

The graphic though are fantastic, even in handheld mode, I think the game does look very pretty. Does suck up the battery juice real fast, so if you are going handheld prepare for that.

Overall game play is pretty good, if not great.

Have I mentioned how much I love the touch screen controls? Seriously phenomenal.

The main problem is the exploitative nature of this game. The stamina style system, and “premium currency” crap that takes away from the fun game play. There is also a very fast mountain to climb in order to stay competitive in races, the longer you stick with Asphalt 9 the longer the grind becomes. All of that alone would cause me to not give this my seal, but you throw in the need to be always online to enjoy most of this game is just the icing on the cake. Because of all those reasons this is not getting my seal of approval. Maybe think about adding shells to the game play next time?

You can listen to our episode on Asphalt 9 on Anchor, or wherever you find your podcasts.

Elliot is a part of the weekly Budget Arcade podcast. Find him on Twitter at @Elliot_Argues You can also find his other podcasts; Tessa and Elliot Argue, and Wall Pull where you find podcasts.
at 10/22/2019 05:00:00 AM