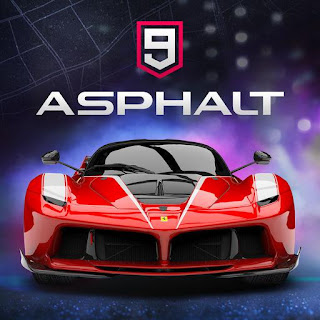 Asphalt 9: Legends is a racing video game developed by Gameloft Barcelona and published by Gameloft. Released on July 25, 2018, it is the ninth main installment in the Asphalt series. In comparison to previous entries, there are several new and improved features, such as a prestigious car lineup, new control schemes, including the autopilot mode called Touch Drive, and race modes, and the reimplemented "shockwave nitro" from Asphalt 6: Adrenaline. The graphics are also considered significantly improved compared to its 2013 predecessor, Asphalt 8: Airborne.

Unlike the switch version there is only four different play modes Special Events, Daily Events, Multi-player and Career. Also all modes require an internet connection unlike the two switch modes that did not. The main difference is also the controls. Touchdrive is the default on mobile, and to be honest is quite easy compared to using the switch controller. Your driving decisions are limited to do I swipe to the left to pick up this bottle of nitro or do I swipe right to hit this ramp? You can also activate your nito boost or hit the "drift button" during turns. With this simplistic approach you don't have to be good at driving games to come out on top of the race. Just have your car upgraded and get enough boosts and you win every time. I cleared parts of the career so much faster than on console. There is a way to turn off the Touchdrive and then you control the car via turning your phone like you would a steering wheel (I did not try that). After playing on mobile with the touchdrive I decided to go back to the switch and try it out. It's exactly the same and allowed me to pass levels that I was having trouble with. Unfortunately that wasn't covered in our episode.

The mobile version has the exact same paywall as the switch but with one minor change. There's the ability to watch ads to get "packs" as well. up to 3 per 24 hours. This makes leveling your cars even faster than the switch.

There isn't too much difference between the two versions and has about the same replayablity value. It is to be noted that the mobile version is about 8 months ahead of the switch version with updates. So items that are available on mobile are not yet on the switch.