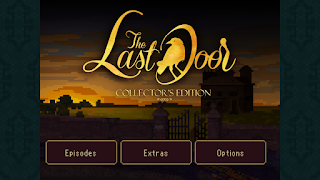 Point and click is not a genre I have a lot of experience with. When I was younger, my dad would come home with demo disks for the computer. If you’re a little older you may be familiar with that, a lot of gaming magazines use to come with a disc full of demos. Some were better than others. I recall when we got a Playstation and it came with one controller and a demo disc. The two point and click games that I played, weren’t actually full games, but demos. One was Freddi Fish, you played as Freddi, trying to solve the mystery of something that had gone missing. I tried to look up which one it actually was, but when I saw the list of game names I couldn’t recall which one it actually was. Let’s just assume they’re all basically the same game. The second one was Putt- Putt Joins the Circus. You play as a talking car named Putt-Putt, and you, just like with Freddi are trying to solve some mystery. In the end you join a circus parade or something along those lines.

I don’t recall enjoying those games, but we did not have a lot of choices on PC back then and I found myself playing them quite often back in the day, before Starcraft came into my life and showed me the video games on PC is where it’s at.
The Last Door and I did not get off on the right footing. I literally spent five minutes trying to kill myself. This really is not a spoiler, as it is the prologue to the game. Point and click games are just not a thing I do often, if ever. I had to click on the rope two or three times to actually have it in my inventory I clicked around for the next few minutes unsure what to do; I knew I couldn’t leave the room I was in, but was unsure what I was doing. I went to the window, nothing. I clicked the chair, it moved. Little did I know I had to click it again. I clicked everything in that dark room. Eventually I clicked the chair again and climbed it. From there I realized what I was doing, hanging myself, so clicking the rafter was simple.

And thus starts The Last Door, a point and click adventure game, developed and published by The Game Kitchen. The music sets the tone, and the opening credits did bring me into the game.

The protagonist here is Jeremiah Devitt, who was summoned to Anthony Beechworth’s house, that’s the man who hung himself in the opening. Strange things are about, and it’s up to you to solve them.

As I said before, I did not get off on the right foot with this game, and that continued into the early game. You walk around, just clicking everything in a room, picking up random things that have no meaning to you early on, in hopes they will come in useful later. I felt very bored in the beginning, there was little story, and in a point and click, that has zero voice acting, that makes it hard to stay in the game.
I eventually got moving, and into the story, from what I could gather from the free to play stuff it really isn’t bad. You’re trying to figure out what this “thing” is that is causing all the problems. There is a lot of back and forth from room to room. Go to the basement, get the hammer, go back to the 2nd floor and pull off the boarded up wall, find a record, take it back down to play the record. Without giving anything away I really enjoyed some scenes, one jump scare in particular was very well done.

Eventually was stuck again. Didn't know what to do with the crucifix. Or the dead Crow I picked up because I could. I figured it out, but a much smarter person could have been done with the first episode pretty quickly.

Overall what your get for free is pretty short. There might be even less to play here than Mario run. Unlocking the games comes with 3 other chapters, and a handful of minisodes, whatever that really means. The story wasn’t bad, but short; it’s hard to really tell how I feel playing this game, half an hour isn’t really long enough to get a good sense, but that is all you have with free-to-play with The Last Door.

Elliot is a part of the weekly Budget Arcade podcast. Find him on Twitter at @Elliot_Argues You can also find his other podcasts; Tessa and Elliot Argue, and Wall Pull where you find podcasts.
at 10/23/2019 12:35:00 AM