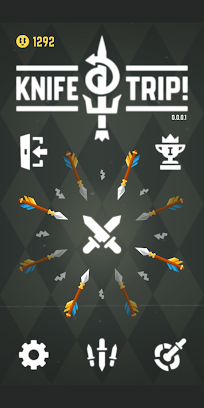 Knife Trip, Developed and published by Mad Point and released on June 29 2022 for Android, is an arcade style knife throwing game. The game gives off heavy boardwalk style arcade machine vibes similar to skee-ball or basketball shootout games you would find in an arcade situated near the beach. What really adds to this aesthetic is the character design of each boss. Bosses really give off a 1960's cartoon vibe, similar to Cuphead. 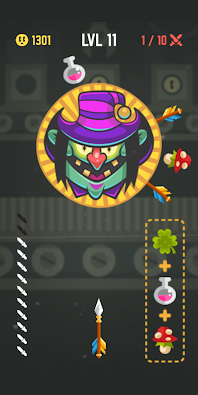 The object is to throw knives at the target boss ahead of you, sounds simple enough. Sadly, it's anything but, each boss has ten levels to them and each one throws a new gameplay element at you. The first level is simple, the circle of the boss rotates counter clockwise around the face, as long as you don't hit one of your knives when it rotates back around it's easy to beat. Quickly the game ramps up. The circle will rotate one way stop and come back the other way, if you're tapping too quickly you'll end up hitting one of your knives and it's game over. Spikes start to appear on the circle and if you hit any of them it's game over. Some bosses have items that you have to hit in a specific order to progress, all while avoiding hitting obstacles on the circle. Other bosses have barriers that will activate and deactivate and you can only throw your knives when the barrier is down. 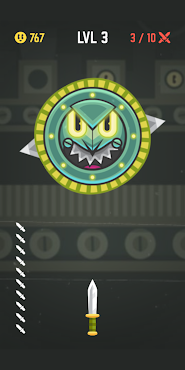 There is no paywall on the game, it's 100% free. However, there are ads once you run out of continues. You're given the option to watch an ad to receive more continues to keep playing. Continuing has no consequence as you just start back at the level and boss you were previously playing. There is however no way to save in this game. If you decide to stop playing mid game you have to start all over when you boot the game back up. That is the biggest drawback of the game as it creates the issue where it isn't pick up and play quickly. There is no toilet time for this game as to get through the entire game would require a lot of hours, even if you were very good at it I would gather at least 45 minutes to get through all of the bosses.
There is an in game currency that is earned as you play. For every knife you stick you gain 2 coins, every star that you hit that orbits some boss levels you gain 20 coins, and if you happen to beat a boss (passing all 10 levels for one boss) you get 10% on top of what you've already accumulated during the run of that boss. The coins are used to buy new knives and with each knife you unlock the ability to start at one of the later bosses in a practice for the main game. There are 12 bosses with 10 levels each for a total of 120 levels. 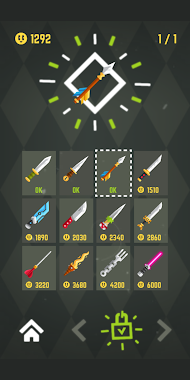 Overall the game is quite fun, it could be better if there was a save feature. The fact that I can't put it down and come back where I left off is quite frustrating especially for a mobile game. There is no pay to win which is a huge plus and the ads aren't intrusive as you can avoid them all together if you're good enough. I give this game a 7 out of 10 purely because of the fact that the pick up and play and come back later doesn't exist and I would have to spend far too much time to beat the game in one sitting.
at 7/02/2022 11:57:00 AM