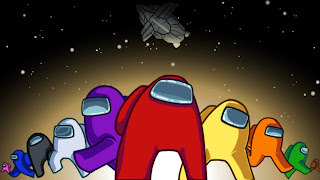 There are popular games and then there is Among Us.  Innersloth's massively-insanely-popular mobile game has taken the online world by storm and it doesn't show any signs of letting up any time soon.

Among Us is relatively simple; you're an astronaut guy on some space-station thing charged with doing tasks to fulfill whatever mission that has been laid out, however while doing said tasks there is an IMPOSTER among you (get it?) who is going around killing crewmates one by one.  It's up to the collective group to figure out who 'dun it' and vote to "float" who they believe is the imposter into space.  Sounds morbid, but a space dude's gotta do what a space dude's gotta do.  That's the long and short of it.  The tasks are simple (think of little match mini-games or raising a lever or sucking up trash in a vacuum), they're not meant to stump you, merely preoccupy you until you either get killed or complete all of the tasks before the imposter kills everyone.

The game is obviously designed to be played on either your phone or tablet from the comfort of wherever you have an internet connection (couch, car, toilet), however there is a disadvantage to playing on mobile and it's when you're playing with a group that is playing on a computer.  You see, in the game when you suspect another player of being the imposter or you come across a dead body, you report it or call a meeting and then you get allotted time to convene and talk it over with the rest of the crew (other players).  This is where deduction and partnerships come in, you can either try to persuade the group to vote in a misleading direction (say if you were the imposter) or you can use your uncanny questioning abilities to try to figure out who among you (get it?) is the imposter.  Those playing on mobile are at the disadvantage because it uses valuable time to type things out on a phone/tablet, whereas those playing on a computer have a full-fledged keyboard and it doesn't take much time at all to type out a short sentence or word.  It may not seem like much, but those precious seconds matter when you're trying to convince the group not to kill you.  Granted, players have become so good at this game that it's likely not a disadvantage at all to seasoned vets of the game, but to newbies it could get tricky.

Playing the game is fun in its own right, however I believe it's best played as a party game.  You create your own lobby and then get an invite code and then you can invite nine other players to join you in game.  You have the freedom to pick the map, the speed of the game, how far each character can see at any given time, and most importantly, how many imposters there are.  I had the most fun with the game while playing with my 11 year old daughter (who is significantly better at the game than I) and together we invited her other friends and collectively played for over an hour just our group.  I could see this game becoming a party staple, even in person.

The game is comparatively more simple and easier to digest than another Budget Arcade reviewed social deduction game, Town of Salem.

While the mobile version of Among Us is free, the PC version of the game is not.  You'll have to spend a cool $5 to play on your computer and as far as in-game purchases go, they are for cosmetic purposes only.  You can spend real dollars to customize your characters color, wear a cool looking hat or have a little mini-me running around with you.  It's another reason why this game has become so popular and likely won't be going anywhere anytime soon.  Gamers love free and they don't like developers charging money to gain a competitive advantage over  other gamers.  An even playing field at all times goes miles.

Sky high.  You can play by yourself with a bunch of randos or you can host your own party and play with a bunch of friends.  You can play for five minutes or five hours.  Simply up to you.  I will say that game can get repetitive and, dare I say...boring?  If you're playing with friends I doubt it's boring, but it can trend that way after a couple of games which is why it's no big deal to close the app and go about your day and then reboot it when you're ready to accuse someone of being "sus" once again.

While the game does get repetitive and can grow stale after a while, there are more than enough people playing this game at any given time to keep the wait times in lobbies short and you the gamer entertained for however long you want it.  The fact that it doesn't cost anything to get good at the game just adds to its allure.  This is a game that will live on your device for a long time.  It gets the coveted Budget Arcade Seal of Approval.