Zind Created by Atlas Software and released on  March 25 of 2020 is a classic action platformer rated E 10+ and available on mobile devices. It offers 72 different hand crafted adventure levels with varying degrees of difficulty. You play as "Angry man" Zind as you attempt to transverse each level.

The game play is reminiscent of  most platformers but with the lack of any enemies. instead the goal is to avoid obstacles such as spikes, bottomless pits and platforms that drop unexpectedly. the touch screen controls make the game play fairly difficult. I was only able to make it to level 12 to a point where there were three platforms of various heights once you step on each platform they rise into a set up spikes positioned on the roof. Because of the way the controls are I was unable to pass this area. The controls for movement were not close enough together to be able to quickly act to avoid being crushed into the spike covered roof.

This is an entirely free game with no paywall. when it was first released however there were ads after every level and after each death. Those have been taken out of the game and I haven't encountered one in months.

Replaying this game can be high. especially if you're a completionist or a glutton for punishment. To be able to get through all 72 levels would require some dedication. I'm not sure if there is controller support but if there is it would make the game way more manageable to play.

Over all I'd give this game a 7 out of 10. Is it frustrating? Yes. Is it fun? also yes. Is it worth your time? since it's 100% free and is enjoyable it most definitely is. Zind gets my seal and should also get yours. 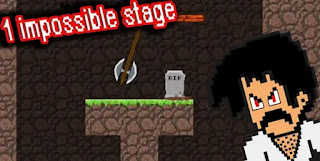