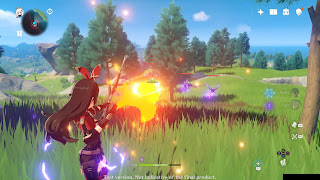 Every so often there comes a game that just blows you away; not because of how good it is but because of its scale.  Developer miHoYo set out to make an anime action/adventure RPG game that was large in concept, touted a massive development budget but was also free-to-play.  Out of those concepts, Genshin Impact was born and it is great!

There's no denying that Genshin Impact bears a ton of similarities to Nintendo's Legend of Zelda: Breath of the Wild.  Everything from the stamina meter, to the combat, to the map, to the monsters you face throughout...everything harkens back to BotW.

You are a mysterious "traveler" from another world stuck on Earth looking for your brother in the land of Teyvat.  One thing about the campaign in this game is that it pretty much abandons the whole "looking for your brother" bit.  It instead replaces it with a more intriguing storyline that allows you to explore the entire map, which is insanely large for a F2P game.

While the combat is pretty good, everything revolves around cooking in-game.  Health options, power-ups, and more are all highly important to your progression through the game.  The anime influences take over the game pretty quickly and make their mark on the gameplay.  Every particular type of anime-inspired character is represented and some are more, er...sexual than others (but that's just another anime trope).  One thing that stands out about the gameplay is the voice-acting throughout by the supporting characters (everyone other than your fairy companion is digestible).  It's particularly well done and makes the game feel more authentic.

The game utilizes element battle where your character's element of choice can come quite in handy in you getting past a certain big bad or progressing through the game's main story quests.  Say you're battling some water bad guys (blobs, probably) and you have a character in your party who specializes in electric attacks...well, guess what, you should probably battle those water dudes with that electric character.

The game's story is told through your "Adventure Rank" which you obtain through main quests, side quests and completing objectives across the map.  The game doesn't really hit a wall until you obtain Adventure Rank 20 or so.  Then it becomes a grind.  Every bit of the story is released as you obtain different Adventure Rank levels.  Personally, I didn't obtain an AR rank of higher than 22 but even then it was becoming quite the grind to progress.

That brings me to the pay-to-win factor that Genshin Impact brings to the action/adventure realm.  It's a fantastic game, don't get me wrong, however as you progress through ranks it becomes impossibly hard to progress where needed without spending actual money on the game.  There's horror stories online of gamers spending hundreds of money on the game, attempting to get a particular character that (they believe) is needed to give them an upper hand in-game, only to get repetitive characters and items that they obtained many transactions prior.  There are tons of different in-game currencies to parse through and spend in order to get the actual currency that you need.  It's quite confusing why there are so many currencies, and I'm not going to get into them all here (just play the game), it's a reason I could see many getting turned off of the game.  It is an absolute necessity, in order to complete the game, to spend your money.  To me, that takes Genshin Impact out of the running for Game of the Year.  You simply can't claim to be F2P and then expect your gamer base to fork  over money (a lot) in order to complete your game.  Sure, if miHoYo had released this game with a $60 price tag and made the entire campaign available and only charged for DLC, we'd likely be talking about a GotY contender.  They didn't and that hurts its overall product.

I believe that miHoYo knew what they had on-hand before releasing this game as a F2P model.  They knew your average RPG gamer would eat this game up and would keep coming back.  Plus you get added bonuses every day, so there's another incentive.  Daily quests are also a thing that bring gamers back and will have Genshin Impact in your repeat library.  The map being so incredibly large also ups the replayability because there's just so much to explore and do, it will take you hours upon hours to discover everything and complete all side quests.

Genshin Impact is the most fun I've had playing a free-to-play game in quite some time.  The amount of detail and gameplay options you have at your disposal is very impressive.  miHoYo hit this one out of the park and I could see this game living for years in its current state with map and story updates.  Give a shot as it gets the coveted Budget Arcade Seal of Approval!