I played Magic brick for a couple of days and this is how it went.

This game is really straightforward you use fighters and bricks to protect your king and defeat your opponent. The bricks have special defenses like fire, ice and poison. They are shaped like Tetris blocks and the shapes pop up randomly so you ha e to be mindful of where you put them and how you arrange them. They regenerate after ten seconds. You tap and place them on your board as you go if you place them over one of your opponent’s fighters they become encased for a few seconds.

You get points and coins to build up your fighters and make them stronger. They regenerate after ten seconds and as far as I can tell there isn’t a limit of how many you can use in a match. There are four different types and I guess they do different things but it doesn’t really matter, as they all attack your opponent’s wall.

I wish the game had an option where you could build up your kingdom I love games like that and would probably find this game much more interesting. All the fighters look the same as your opponents you can’t customize them at all which is annoying to me. The game play is just placing bricks and adding fighters then watching said fighters cross the board. It’s kinda boring.

If the game let you customize things and build a kingdom or had a bit more to the fighting I’d give it a higher score. I did however win every match I played so there’s that. 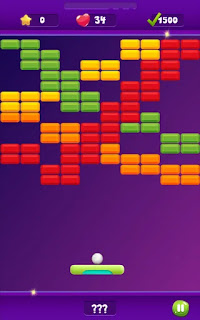