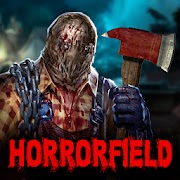 Horrorfield is a multiplayer survival game released by Skytec Games. You, and three other “people” a term I would use very very loosely, run around a map and attempt to turn on five generators. Those generators will in turn allow you to escape through, what appears to be a garage door, that is powered by five generators. You’re trying to do this while a fifth “player” runs trying to capture the players to lock them up.

Gameplay is fun, at first. You begin with only one character unlocked and as you progress by playing you unlock more abilities for that character, as well as other playable characters. I say it is fun in the beginning, but progress is slow. As you unlock skills, or levels, they are all on a timer. You unlock the ability to create soda, but now you have to wait an hour before you have actually learned how to do so. For quick little matches here and there, this provides a big problem with gameplay. Unlock most characters is at random as well, which I’m fine with, but I just wanted to play as the fat professor Gary, or the foreign exchange schoolgirl Mary. Instead I got Phil, the old moron. You’re dead to me Phil.

Gameplay is fun, until you realize that winning as the rag tag group of misfits is hard. Really hard. So hard that I played for six days in a row and won less than ten times. Luckily, once you level high enough you can play as the monster. Again, that’s fun for a little while, but winning is really easy. Just by camping one of the handfuls of generators I would catch multiple people. Which leads me to believe that I was playing mostly against computers, and dumb ones at that.
You can listen to the episode to hear all the other things about gameplay that I’m skipping out on. The leveling system isn’t good, neither are the skill trees, that take forever, unless you want to use that premium currency. Another two currency game that really takes away from the fun. Or how if you get caught by the monster you have to sit and hope someone comes around to rescue you. And then heal you back up, or you’re still worthless.

It’s not that the gameplay isn’t fun, but stale after a few rounds. This is the type of game that would be best enjoyed in a room of five people all playing together. But changes need to be made as well. This is just too one sided of a game for the monster. This type of game has been done better, and it shows.