Theme Solitaire is a game in which players can play cards to easily collect resources in order to build their own themed tower, using fairy tale characters. Theme Solitaire is free to download on Google Play and the App Store. The following review is by Tessa.

I played Theme Solitaire for a few days and this was my experience.

First off, it wasn’t exactly solitaire, you get a stack of cards and then several cards on the board that are either facing up or turned over. You have to get the cards off the board by flipping up cards either one higher or one lower. Later on down the line they add in ice which freezes until you match, only then can the card be matched again and taken off the board. The next thing they add is a bomb, you have to match it in three turns or it explodes. You have a set number of cards to go through and once you get done you can pay 2500 coins to get five more; I’ve never done that option as it doesn’t seem worth it. If you flip a card without meaning to you can pay to flip it back I have done this a couple of times as it’s not too expensive.

The object of the game is to earn gems to build different fairy-tale rooms in a tower. I have finished Alice and wonderland and Snow White. I’m now working on Rapunzel. You have a choice when you build a new floor. I’ve only built three floors so I’m not sure how many they have to choose from or if the choices come back around if you don’t pick them.

This game is right up my ally as fairy tales are my favorite thing, however the game play is not great. It’d be better if it was actually solitaire but it’s just matching cards. The ice just gets annoying and the bomb isn’t nerve racking at all.

You earn gems and coins with each game you play, you use the coins to enter the game and the rubies to build with. There are also rings you can earn but I’m honestly not sure how you earn those. There is a timer on each game and if you finish the game within that set amount of time you get a coin bonus at the end. The entry fee goes up every level but you get the coins back at the end plus bonuses for time and for doing multiple plays on the same card. I think it’s kind of silly because you pay so much to play but then immediately get it back at the end. It cost 20,000 coins to build a new floor. I’ve only built three so I’m unsure if that price goes up at the end or not.

You also uncover artifacts as you play you use these to craft different items. I’m not sure what exactly these items are used for maybe I’ll learn if I play more.

Overall the game is just ok, it is a bit addictive as I love to build stuff and I love fairy-tales but those aspects don’t make up for the boring game play. It is a good way to spend five minutes and it doesn’t have a set amount of lives so you can play as much as you want. I am undecided if I’ll keep it on my phone or not as I like building the tower but it’s still kind of boring so we’ll see.

Tessa is from the podcast Tessa and Elliot Argue, you can find it on iTunes, Spotify or wherever you get your podcasts. Follow her on Twitter at tessie_paints. 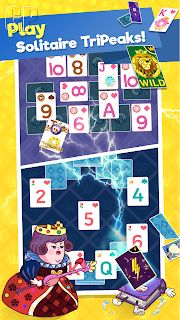 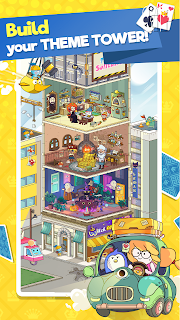