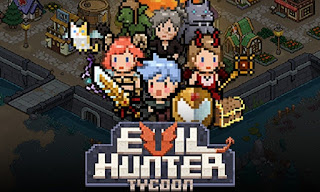 Evil Hunter Tycoon is a game produced by Superplanet and Retro Arts. I believe it released this year (2020). The brief description from the apple store says it all.

“Become a Town Chief!!
Handle everything starting from Town construction to craft, sale, and training Hunters!”

Gameplay: The game is basically a town management game. Hunters arrive in your town looking for monsters to kill for money and loot. They sell the loot and spend money in your town, allowing you to upgrade buildings, create items to sell (i.e. equipment, bandages, etc.), and organize dungeon raids which become progressively harder as you complete floors. Once the hunters level up a bit, there are three zones that they can hunt; you can assign them to whichever zone you please. If a hunter dies, they can pay gold to your town to be resurrected. There are different classes of hunter (may be more in late game but these are the ones I encountered): Berserker, paladin, ranger, and sorcerer. The classes have units that are considered normal, rare, superior, and heroic ranked stats. Each class has specific class weapons/armor that can be equipped. Your hunters can level, you can also teach them skills as they level up. Since it is a town management game, you can place your buildings where you want however you have a boundary and random obstacles that you eventually can remove through in game currency. Gold isn’t the only currency to upgrade with. Loot that is sold to the town or that you tap on in the monster zones are used to craft items and also build/upgrade buildings. This type of loot is, for example, cloth that can be used for bandages or oranges for drinks for your hunters. There are gems which is the “premium currency” and elementals which seem universal for most items, but they seem to not go far in being used. The elementals require a lot more to craft the most basic items. Most of the buildings are typical and to list them all wouldn’t benefit you as the reader, but generally there are weapon shops, inn, tavern, and a shop that you can request for loot from the hunters. That type of stuff. Most of the time, you’re micromanaging hunters, clicking on them and telling them to go to the shop, once they arrive, you can tell them what to buy. Same mechanics to learn skills, change zones etc… Find the hunter, click, wait, click again, and watch them go back to their target. The game gives you a tutorial type quest line, but it was rather slow to progress, some of the quests were to collect certain items that drop from monsters or watch a hunter kill a type of mob twenty times. The dungeon was alright, pay gold per hunter and watch them walk straight into mobs and then attack, but it was all auto and melee units bunched together to where it was difficult to see their health and damage. The dungeon loot was crafting items, no gold. I would be wrong to not mention guilds in the game also. There are guilds, took me three days to finally join one, they’re request only and I applied for half a dozen open to anyone guilds before one finally recruited me. Once in a guild, you can donate a guild currency that you get from doing bosses and dungeons. That guild currency I believe gets you upgrades, but I couldn’t figure out how to see what the upgrade does, it’s picked by the guild leader so it probably doesn’t matter much on your vote. I’m also told there’s pvp in this game, but I never got that far to witness it.


Paywall: The shop in this game has many tabs. You can buy gems which are usable toward crafting and other tasks, more of a general premium currency. You can use gems and elemental to buy hunter invitations to your town, but there are caps to how many can be in your town before upgrades. There are also packages that give exp boosts and hunters. You can also pay for enhancement stones which I never was able to use one, but I believe it’s for equipment. You can also pay for costumes and pets. Basically this game wants your money and gives you many ways to use it. Prices range from $4 to over $100. Woot! I would say this game is both pay to win and bedazzle. If not to win, then to at least advance in the game significantly faster.


Replayability: This is much like an mmo where the game never truly ends. There’s always something to do, albeit watching hunters do things. There are dungeon floors to raid, there are guilds to get points for, and there are bosses, also supposedly pvp. There are shops to restock, hunters to order to do things. Ultimately, this game is very replayable. It’s not something I want to replay, but if it is your type of game, there’s plenty to watch.


Judgement: I personally wanted to stop playing this game the night I installed it. I was bored right in the beginning. There just wasn’t much interaction, it’s mostly watching hunters do repetitive things and micromanaging them. The very first dungeon “raid” I organized, one of the hunters didn’t show up because he wanted a bandage from the shop that was out of stock. So he simply sat there until I found him, restocked the shop, and he finally joined. There wasn’t a popup where I was looking saying the shop ran out, I simply had to notice the hunter with a thought bubble complaining about it to realize it needed restocked. This wasn’t a one time occurrence either. Furthermore in order to get items for upgrading and crafting, you have to request them from hunters and it was hard to request a perfect balance. I either had too little loot to craft with or too little gold from requesting too much loot. Sure you could watch an ad for gold, but as soon as you did, you had to spend that gold otherwise someone else might sell stuff to your shop before you could. The only way to make money is to craft stuff for them to buy, but you have to tell them to buy equipment. I had high levels running around with starter items because they couldn’t buy anything for themselves. This was a micromanaging hell and honestly I am glad to uninstall it. Perhaps it would be better in the end game, but there are much better games to play than this one in my opinion. This game actually reminded me of a game by Kairosoft called dungeon village, basically the same concept but less micromanaging. Very simplified, albeit not much end game. That game I believe cost $5 on IOS (my platform) and was from 2012. If that’s been updated for the newer operating systems, I’d recommend that as a paid alternative. Evil Hunter Tycoon definitely does not receive a seal from me.