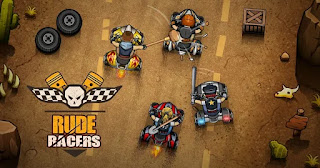 When I was asked to do a review for Rude Racers, I was curious.  I saw that it was based off of Road Rash, which was an amazing series on the Sega Genesis, so I went from curious to intrigued.  Then I played the game and the intrigue turned back into indifference. It was an emotional rollercoaster to be sure, but ultimately I’m glad I checked it out, even though I will most likely be putting it aside for better games in my backlog.


Rude Racers is a casual 2D combat racing game developed and published by Famous Dogg Studios, and is available on iOS, Android and Steam.  I have an Android phone, and it is free to download on mobile devices, but on Steam it is currently $2. The reviews on Steam were very positive, but I started on mobile since its free.  Though most of my review will cover that version, I did eventually get to download the PC version.


The game consists of you riding an ATV in a race against others, and you race upwards on the racetrack avoiding obstacles and beating off the competition to stay ahead in the race.  In a lot of the reviews I’ve read, they mention the action being “fast and furious” in many of them, but I personally wouldn’t go that far when describing it. Your speed does not change in-race, and it definitely doesn’t feel frenetic most of the time, though you can buy vehicles that have better speed stats.  You gradually catch up with the other racers, and after passing them, they gradually catch up to you. The gameplay modes consist of Seasons, where you earn trophies and money for upgrades to your vehicle, person or weapon, and Quickplay matches where you can play a match for some quick in-game cash.  In the Seasons, there are multiple types of game modes, including races, deathmatches mode, and even a mode where you compete with the CPU characters to knock down the most pizza delivery vehicles, which establishes a bit of variety. Each season is a different setting, but each track still looks and feels the same.  If the game seems too easy at first play, you eventually can choose between easy, medium and hard modes for each mode, each subsequent mode earning more money than the previous one if you win. I was bored playing easy mode and quickly switched to hard mode, which was more my speed. (Pun intended) Each round of the mobile version that you play consumes 1 unit of fuel, and once all of it is gone you have to wait for it to replenish.  Video ads pop up periodically between matches, and you can watch ads to earn extra fuel.


The controls on mobile consist of horizontal movement and an attack button, which is nice and simple for a mobile game.  If you have a small enough phone to hold in one hand, I imagine this game is easy to play. I own a Note, and I don’t have Tony Robbins’ hands so I certainly couldn’t play one-handed.  Still, I like my mobile controls simple in a pick-up-and-play game, and the controls work well for what this game is. The PC version allows you to use the keyboard & mouse or a controller, and the controls remain the same.


Thankfully, there is no “paywall” on the free mobile version, and there isn’t any in-game currency to worry about.  There is a shop available to buy extra cash or fuel for $0.99 or $2 to get rid of ads (presumably only in the mobile version), which is the same price of the Steam version.  Well played, Famous Dogg. I didn’t play the game enough in one sitting for the ads to bother me too much. There isn’t much extra functionality to the PC version of the game that isn’t included in the mobile version, which makes the free version a good way to start, especially if you’re unsure if this game is for you.


When it comes to replayability, this game is more suited to being a casual mobile game than a simple Steam game.  It may even have benefitted as a free web-based online game, but I can understand why the Famous Dogg would want to make a bit of money off their efforts.  When I was a teacher, I certainly would have let my students play this after they finished their work, and I imagine kids would enjoy this much more than adults, though it has a certain appeal regardless. Even though the concept of racing and attacking the others is somewhat violent, I’d still let my 5-year-old play this game and he might enjoy it more than I did.


Final Thoughts:
I’m torn as to whether to recommend this game or not.  This game is a simple race and bash game with simpler graphics, and it gets the job done as a quick-fix game.  I never felt the need to play it for long stretches of time, and it’s not the first game on my phone that I run to when I need a gaming fix.  As a free casual mobile game, you could do worse...but you could find a better one too. Give it a shot, play through the first few rounds and get to the spot where you choose game modes and difficulties and you’ll start unlocking things.  If you’re not pulled in by then (and unfortunately I wasn’t), at least you didn’t shell out a whopping two dollars for the PC version.


Steam version: 5 out of 10 - it’s fun in small bursts, and may appeal more to younger gamers. Would serve better as a free web-based game for kids, but as an adult I’ll turn my gaming efforts elsewhere.


Mobile Version: 6 out of 10 - It’s more accessible to a wider audience as a casual one-handed mobile game that’s easy to pick up and play.  Not the best game out there, but definitely scratches an itch if you need a distraction.