SK8 Online, developed by Legit Games LLC, was released on April 14, 2021. It is available on Android and iOS devices. The game is a head-to-head "horse" style skateboard game where you attempt to land tricks, to which your opponent must match the trick or risk getting a letter. 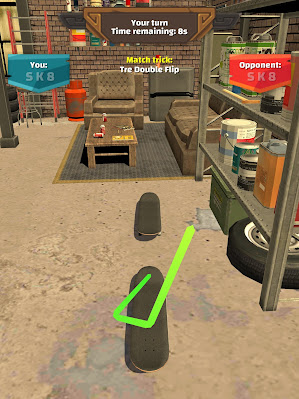 The controls for this game are interesting for a touch game. You're required to swipe in specific patterns for tricks; if you manage to swipe correctly the board will fly into the air with a rotation dependent on which trick was performed. While in the air, you are then required to tap the screen to "set" the trick; tap too soon or too late and you fail the trick. The longer you let the board fly in the air, the more rotations will occur until the board falls to the ground. In all the attempts I made the board would rotate slowly at first then speed up as the board fell towards the ground making early tricks easier to set than later tricks that require more rotation like a 180 shuvit vs a 360 shuvit.  SK8 Online is played in a third-person view of the board so setting tricks requires the board to be as close to perpendicular on the screen as possible or else the trick is considered "bailed", but if close enough but not perfect you will get a sketchy trick which will prompt one redo. 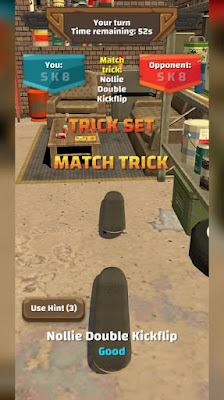 There is only online play in this game, and you queue up and wait for an opponent. As you wait, you're able to practice tricks until an opponent is found. When I first started the game, I was worried that this queue was going to take a while because I wasn't sure how large of a player base this game had. My first game this queue was long, but this game has a very interesting feature that other phone games should incorporate. When you're not playing, you'll receive push notifications letting you know when there's an opponent available; you're then given 2 minutes to make your initial turn before it's a forfeit. You can also set up a private game that a friend can connect to. Games are set up so that one person performs a trick and if the trick is properly set the opponent then has to do the same trick. If they are unable to do the trick they get a letter, however, if they land the trick then they have to complete a trick and you're required to do the same trick. once a player gets all three letters in "SK8" they loose. 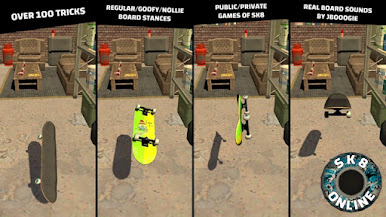 The game concept is great; it should work very well. Completing tricks, however, isn't an easy task and this is made evident in matches because even though it seems like you're swiping correctly your board will just sit on the screen until you've managed to swipe the correct pattern to start the trick. And the down time between both players when it's their turn only has me imagining that my opponent is struggling to pull off a trick as much as I'm struggling. What makes matters worse is after you've completed a trick and your opponent does or doesn't match the trick you're no longer allowed to use that same trick in the match. This game's only saving grace is the push notifications that there's an available match. I would like to see a solo mode where you can actually skate the board around a course and complete tricks while skating but that would require tricks to be easier to pull off. So I'm going to have to give the game a 4 out of 10.