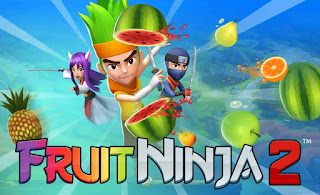 Friends, how do you make a sequel to one of last decades' most surprising hit mobile games? Call it "2".  That's exactly what developer Halfbrick has done with Fruit Ninja 2, which is to say not much at all.  I believe not changing much when it comes to gameplay or how the game is received, is a praise in its own right because it requires confidence by the developer to know that the previous game was a hit and by keeping much of the core game in the sequel will lead to the sequel becoming a smash hit as well.  Now, that's does not mean that Halfbrick just simply recolored some fruit and placed some new character skins in Fruit Ninja 2 and called it good.  No, they actually kept the core gameplay intact and added some options that allow you to explore the game's in-depth offerings.  Let's dive in.

Remember playing the original Fruit Ninja game and the fun it allowed for as long as you wanted to play, and then you could simply exit the app and not have to worry about what level you were on or if you completed all of the objectives.  Fruit Ninja 2 keeps all those same stakes, which we like to call "no stakes gaming" around these parts, while taking your journey into fruit slicing down a few rabbit holes.  The core gameplay experience still revolves around you slicing fruit with your ninja sword - as you are a ninja, once again - and the more fruit you slice the higher your point totals go.  It's not complicated.  However, some added gameplay options that this sequel brings are the ability to attach "special moves" to your slicing; sometimes these super abilities makes fruit bigger, sometimes they make more fruit appear on screen, or sometimes they're just point total bonuses that last for a brief period.  You can have three total attached for you to use.

Everyone loves a multiplayer option with Halfbrick going the extra mile to bring the gameplay mode to Fruit Ninja 2.  It's one of the games' best additions and it's done particularly well.  You join a lobby of players and when the game pits you against another person. You each get turns to slice fruit and then you slice fruit on the same screen at a higher pace.  It's particularly addictive, the rush of slicing apples and bananas against another real person.

Evolving the game means adding more gameplay options, beyond the multiplayer.  Halfbrick has added some challenge progressions to the core gameplay experience, and it may be the most rewarding addition to the game.  The challenges often change depending on the day or week but most are slotted-in options that make you complete time trials or obtain point totals or not hit any bombs by the end of the time period.  As you progress through the challenges you'll eventually reach the end where you will be rewarded with either a new sword (I only obtained one new sword this way, and it wasn't necessarily a gameplay advantage) or a new special ability or, my favorite addition (sarcasm), a plethora of in-game currency that you can use to either improve your ninja character's look or purchase a new sword or purchase new abilities.  This is where the game takes a dip in quality for me.

Make no mistake here, Halfbrick is in the video game business to make money and that's a very clear change in this sequel from the first game.  The first Fruit Ninja didn't have many in-your-face micro-transactions, but this go-around clearly wants to capitalize on your gameplay experience.  There are a slew of different in-game currencies that reveal different things throughout the game.  One particular currency - tickets - allows you more attempts at the challenges section (as you only get a set number per day).  The more tickets you have the more chances you have at obtaining the prize at the end of the challenge road.  It's not a new method, but one I didn't quite expect when I started playing the game.

Another currency is seeds that you can obtain and plant in your garden in a different section of the game.  These seeds require watering and don't grow particularly fast (think hours), so it requires you to come back to the game in the time specified to see what has sowed.  Most of the times they are just gameplay boosts, but you can obtain other forms of game currency this way.  Regardless of the many in-game currencies there are, it isn't so much to bog the game down or make you overwhelmed.  You can still download the game for free and play to your hearts content and then put it down.  That's a win.

Rationalizing Fruit Ninja 2 as "no stakes gaming" doesn't require much effort at all, and that's precisely the reason why the replay factor is so high here.  You can simply pick it up and put it down.  There isn't anything in game that makes you worry or fret about continuing for the replay factor to take a hit. You're also not likely to run out of things to do.  Did you just plant some seeds in your garden and now you have to wait 12 hours for them to grow?  No worries, just log back in at the time and collect your reward.  Log back out when you are through puttering around.  Truly no stakes.

Knowing your audience is always key when it comes to mobile games.  Halfbrick spent a decade tinkering and evolving their gamer base, with Fruit Ninja 2 they have not only brought back the addicting gameplay of the first title, they've improved on it creating a more well-rounded and in-depth experience that can live on your phone or tablet for years and years.   Fruit Ninja 2 gets the Budget Arcade famed "Seal of Approval".